Molly Shannon (SNL, Other People, The Other Two) published her first book today. I specifically clarify “first” because I really hope there is a second and third. I haven’t been as entertained and moved by a celebrity memoir since Tina Fey’s Bossy Pants.

Molly does remarkable writing in this work. I can’t emphasize enough how hilarious and moving her book is. Fans will feel at home reading her book because her voice is so clear, so charming, and so Molly. The threads that ring most true are also themes that appear in some of my favorite Molly characters. Mary Katherine Gallagher’s nervous naughtiness is here. So is the positive do-er attitude of Pat (The Other Two). And perhaps most notably present is the charming tragi-comedy of Molly’s role as the mother in Chris Kelly’s semi-autobiographical, Other People.

But, whether you’re an SNL-nerd, Molly stan, comedy buff, or none of the above–this book is worth it. Pull it off the shelf and give it a read. You’ll laugh and, if you’re anything like me, you will absolutely SOB through the last several chapters. There’s a striking balance between goofy stories of misdeeds (see the list below) and heartfelt tales of family tragedy.

See this pic of me in bed after finally finishing this GORGEOUS book: bad lighting, puffy eyes, grin, and all. 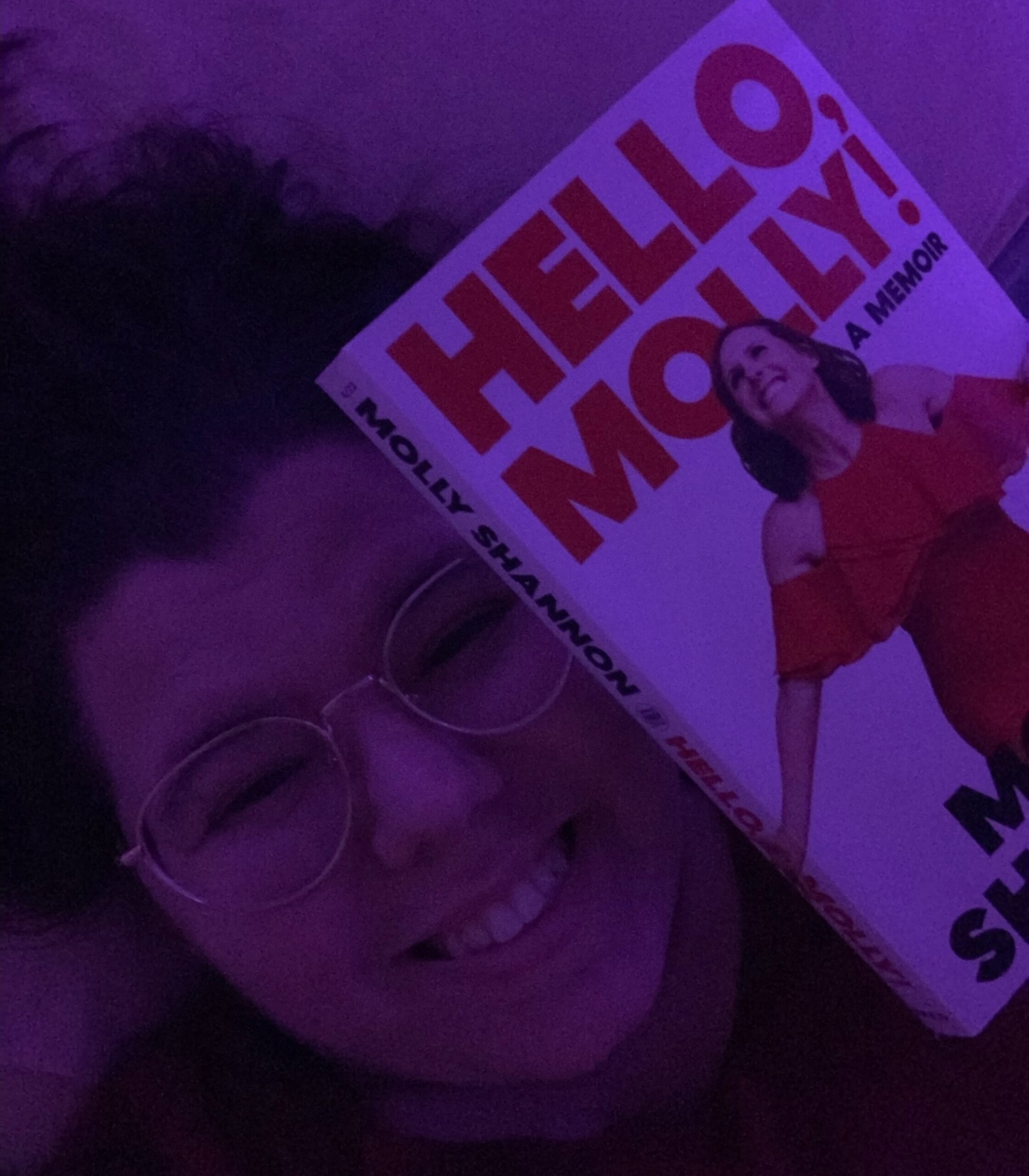 All of this is true. And you can read the New York Times article that scooped me for more on how Molly handles a complicated, loving, weird relationship with her father with grace, emotional abandon, and the kind of goofy love only an incredible artist and person can lend.

But, I’m actually here to list all the crimes that Molly Shannon confesses to within the pages of this criminal manifesto. Important to know that she shows NO remorse! ONLY giggles!! WHAT?!

At the end of the Mamet Scam chapter, Molly says “Maybe more women need to push the rules to get to the yes and even out the biased playing field in Hollywood.” And I agree. This list serves one purpose only. Not to shame Molly or actually propose that she should be “punished.” But to reiterate what white ladies’ water bottles have said for decades: Well Behaved Women Seldom Make History. This list should serve as a guide.

Mischief before all else. Taking risks, having fun, and joyfully encouraging chaos is just a better way to live. An incredibly privileged way to live, but a necessary one. An ideal future is one that is more forgiving to all mischievous people–one with less punishment and more encouragement.

These last few months, while TikTok convinced me I have just about every anxiety disorder (and then some), Molly’s book freed me. It reminded me that a comedian’s life, an artist’s life, is a fully lived life. By nature, by definition, it must be.

Hello, Molly! is out now. It’s an incredible story full of depth and warmth. I can’t recommend it enough.

*An outright lie. But this isn’t a list of MY crimes.

Maggie Scudder runs the Editorial Content at GOLD. She is a writer, comedian, and NYC transplant. On her podcast, Edward is a Vampire, she is staunchly Team Rosella (RosalieXBella); on her TikTok, @wereplayinggames, she is very competitive; on her substack, the Bronze Age of Television, she geeks out about Bad TV. She loves sourdough toast, walking on boats, and the rule of threes.