Lightning struck Saturday night (or, well, early Sunday morning)! It all happened on SNL’s Weekend Update, but like I was back in Middle School, your girl was sound asleep by the time the thunderous applause storm rang through the city.

Instead of hearing the sizzle live, I saw what can only be described as a victory lap on social media Sunday morning, alongside the rest of the early-to-bed, early-to-rise-ers (aka my peers: the losers and lame-os). In what was effectively her SNL debut (or at the very least, her coming-out party), Sarah Sherman gobsmacked, glittered, and absolutely smashed us into oblivion. She did it all so joyfully, with such pizzaz and old-school charm.

Pause reading here and watch the segment (above), if you haven’t already. It’s one of SNL’s best in years, and I think Sarah should be the Most Famous Person™ now. If fame was relative to acumen, she already would be. Even Twitter agrees! 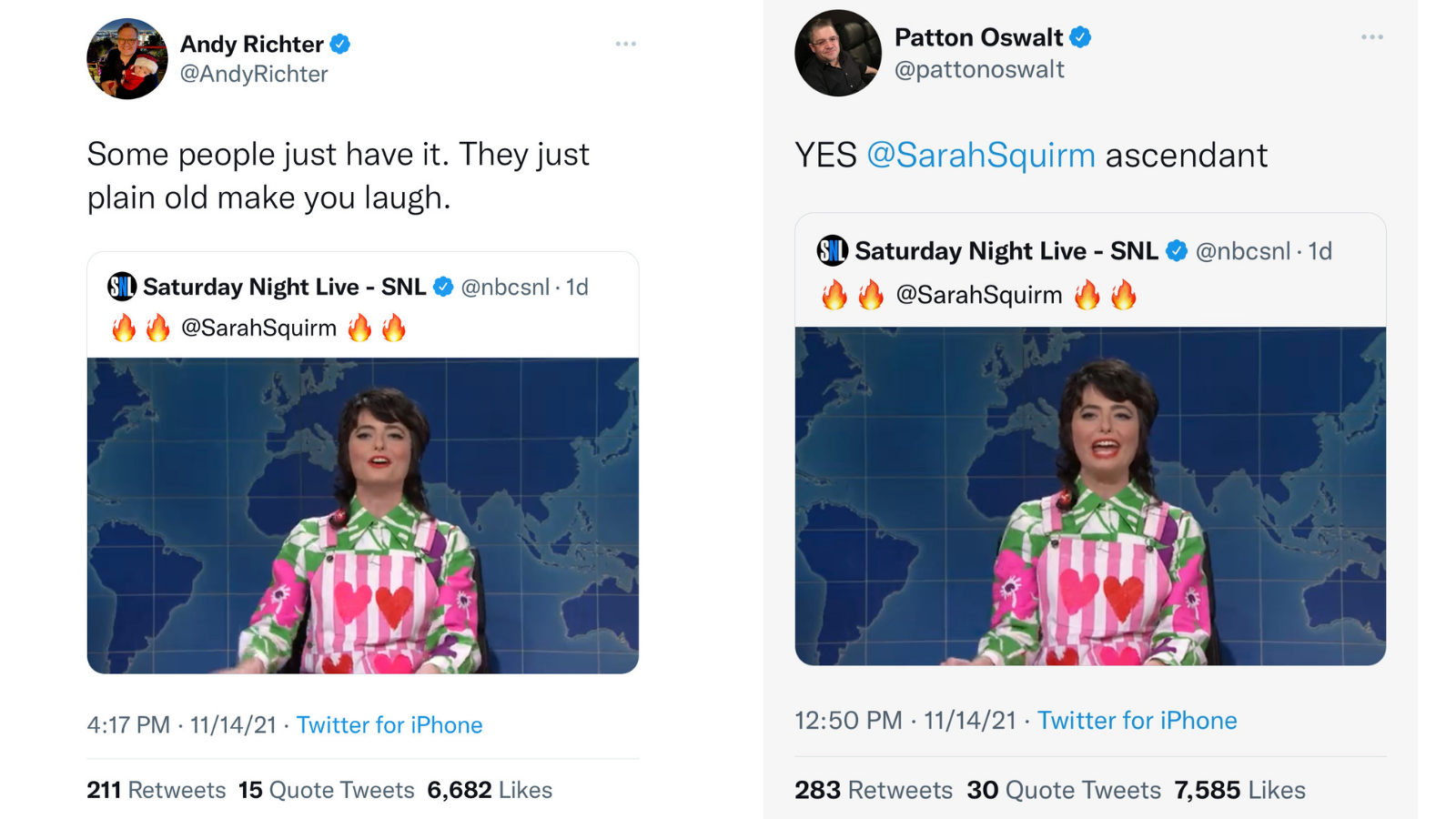 Sarah’s not old-fashioned; she’s alt and cool. In her bit, she’s donning clown-thrift-chic which Colin Jost notes is “buttoned up to (her) neck”. Yet, her delivery–of which there is never a dull moment or downbeat–is nostalgically joyful. And, yeah, I mean that in the etymological sense: it is FULL of JOY! She smiles through the whole damn bit, grinning to assure us that we’re all in on this. Her cheeky grin tells us that she’s thrilled to be in such a historic house, that it’s her house, and that she’s plenty comfortable there.

I have no critique or takedown to share. There is not a single one on the internet worth reading, I assure you. This bit felt both inherently fresh and immaculately tied back to SNL classics.

The writing is not immaterial; the segment is incredibly well written–tight, goofy, and every beat is right in the pocket. The truth is, we all love to make fun of Colin. Why? Because he’s cute-enough, white-enough, successful-enough, and married to Scarlett Johanson. That’s NUTS! So, team that with the added juice that Sherman is calling her new boss a pervert and it’s…funny! It’s just undeniably funny. The graphics? Hilarious, creepy, totally on point. But, the fact remains, her delivery pulls a very good bit and rockets it into the stratosphere.

Was I the only one that couldn’t stop thinking “Is this what it felt like to watch Gilda?” Like Gilda’s, Sarah’s star can’t be denied. The Roseanne Roseannadanna-like magic started (for me) with “YOU PEOPLE ARE BEING LIED TO!” and truly never stopped. My laughter was mouth-agape. The kind of laughter that, after watching the segment a half dozen times, has shifted into jaw-dropped, grinning admiration. 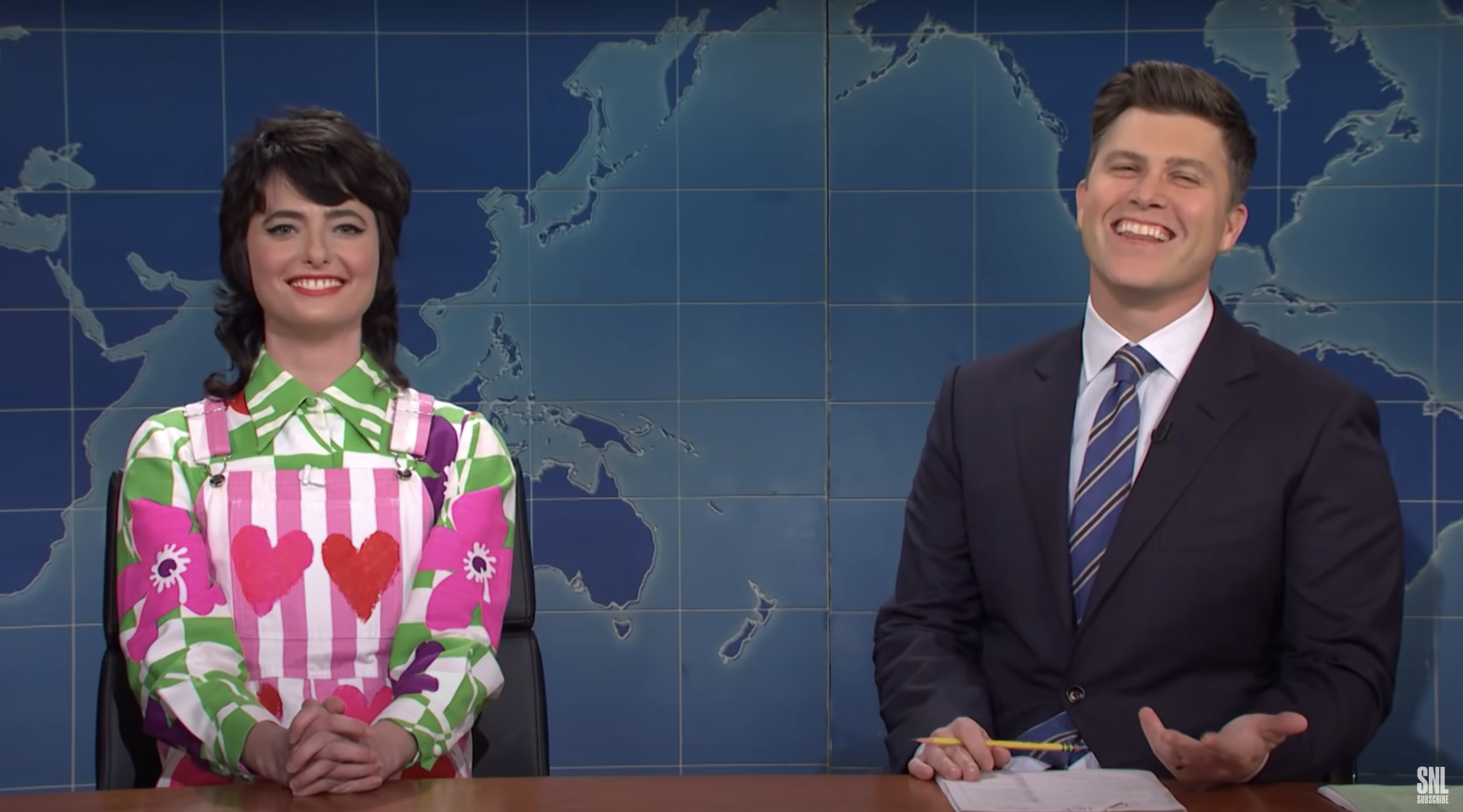 I’m not sure how SNL will choose to utilize her this week, or in the coming weeks. But, one thing is for sure, praise like this seeps into even the fanciest offices at 30 Rockefeller Plaza. And I saw Lorne on set during commercial breaks (That was crazy right? Did everyone see him? Surely he can watch a feed somewhere else?), so I know he saw when God brought Her little Midas-finger into the Update Desk and tapped Sarah on the shoulder.

AND ANOTHER THING… If you’ve read this far you’ve heard me describe this segment as lightning in a bottle, magic, a rocket, Gilda-ed, and gilded. So, I think it’s only fair to add that I’m not usually so obsessed, or maybe I am. But, I definitely don’t gush so publicly. But, sometimes you see something so fun and good that you must type out your mushy feels about it. This is that, for me.

As a comedian and performer, it felt nice to see Sarah smile and giggle and scream through a bit on SNL. She made me feel like I could pretend to feel that way. She gave me, and I think (hope) other women across the country, permission to stare out the window and pretend to be Kristen or Gilda or her. I haven’t felt that Update-envy in years! It’s probably been since Amy Poehler left or I realized that Jost and Che were just wearing jeans under there. (Where did they buy those jeans, a store?)

Concluding remarks? Do yourself a favor and keep an eye on Sarah’s SNL career (and beyond). I think it’ll be a big one! Plus tweet @GOLDcomedy and tell us your all-time favorite update character or bit! We love to watch!