The holidays are so here. How here are they? They’re so here that I’m feeling judged about watching so much The Good Wife. Finding the right gift for the comedy nerd in your life is hard! We know! They’re obsessed with everything, so what don’t they have? We know they have all of Mindy Kaling’s books already…so we’ve compiled a list with everything else they probably want, but don’t know how to ask for. 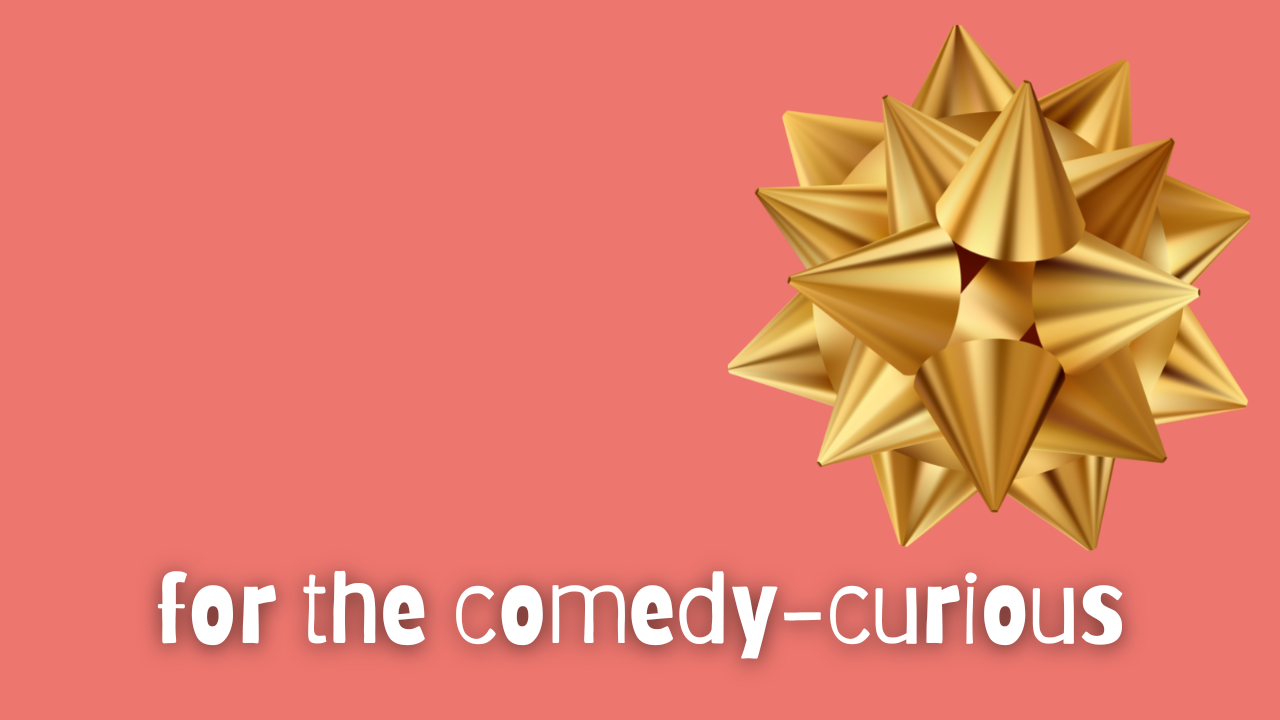 This is the ultimate, comprehensive history of Saturday Night Live. Any comedy fan has room on their bookshelf for this tome. It is a fat little dude (a long book), so there’s plenty to love. Maybe your giftee will skip ahead to all the Tina Fey parts (like I did), but eventually, they’ll want to read the whole whacky tale.

Thinking about dipping a toe in the TikTok pool? A solid ring light will make it possible for any comedy-curious person to start making funny videos. Good lighting is half the struggle!

Quirky girls, unite! If your giftee is a comedy nerd, they need a few bags to carry around their emotional and physical baggage. These ducks are honestly so cute. These totes are the exact right size for tossing a new comedy book and your laptop into. If your giftee is thinking about jumping ship to one of the coasts, a tote will serve them well on their treacherous commutes. (And I’ve literally never met anyone who has written a whole screenplay in their house. Half the point is to write in a Starbucks so that other people look at your screen and see the screenplay and wonder “Is she famous?”)

Molly Shannon is a titan. Her recent work in White Lotus, The Other Two, and I Love That For You is so so good. But, the best way to appreciate this star is by reading her memoir. You’ll laugh, you’ll cry. It’s really fabulous.

HBO, Showtime, Paramount+, Discovery+, Netflix, Hulu, Disney+, Apple TV+. Find out what your favorite comedy nerd DOESN’T have and give them that! The best way to dive deeper into the comedy world is to watch as much funny TV as possible. All of these streaming services have great shows, past and present, to help pass the time. It’s the gift that keeps on giving!

If your giftee isn’t yet ready to quit all bad jobs and live your life as a comedy superstar….. Join the club! They’ll simply die for this mug that says what we’re all thinking at 8:45 pm when the Godiva chocolate cafe we work at closes in just 15 minutes but a large Dutch family walks in.

What can I say about this ornament that it’s not already saying? This is just flat-out funny to me. With the added comedy-nerd bonus of being a reference to The Good Place–it’s a no-brainer for your ornament swap this year.

Strategist be damned! There are so many great board games out there for nerds (comedy- included). But this one is simply, hands-down, the most fun. Take it from me, I’m a legit expert in this field. Dream Crush will provide true laughs around the whole table. The point of this game is simply to be the best at guessing who your friends have a crush on…but the crushes get cringier and cringier every round. It’s a perfect game! No notes!

I know this is the second bag I recommended. But both are very good. I can’t tell you how nice it is to have a go-to grab bag for open mics or on-set days. Stock this baddie with your little notebook, tampons, your vape (don’t smoke, kids), and extra tummy medicine. Then when it’s 5:30 on Monday and you have to run 12 blocks to make it to the open mic to sign up for a good slot–your bag is PACKED.

Some of us, comedy nerds, have to share an apartment and room with non-comedy people. If that’s your giftee, they may be desperate for funny items to disperse around the room. It’s important to curate a funny vibe!! These candles do the trick. Nothing like eating late-night Taco Bell in the light of your chicken thigh.

Okay, picture this: your comedy-curious bestie just nailed their first set at the local open mic. The cool-girl host comes over to them and says “Hey, nice set!” They blush. Wow. Who knew networking could be so cool and chill!? But then the hot host girl says “Do you have a light?” and holds out her weird organic cigarette. Don’t you want your giftee to be prepared with a very cute lighter that she keeps in her open mic go-bag? Yes! You do!

If your giftee is curious about what it’s like to write comedy or “be” a “comedian,” there’s no better home for them than with us at GOLD! You don’t have to be a career comedian to find friends and fun with us–our community is made up of Physicists and Wellness Coaches, Grandmas and high school juniors, Emmy-nominated producers, and struggling assistants. There’s no better place to dip a toe or dive in than GOLD! 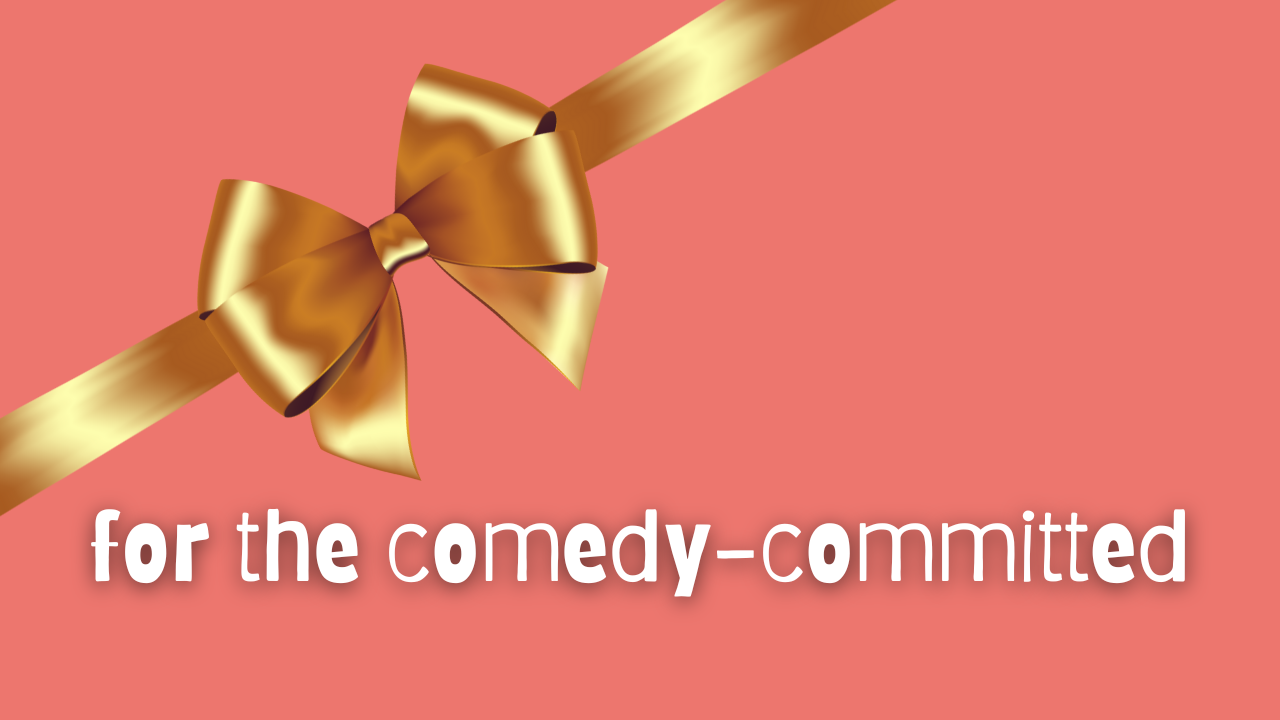 This is the newest book on my TV books bookshelf. If your giftee is committed to doing the whole comedy THANG, this is the perfect book for them. The author takes you through the ins and outs of staff writing rooms. Beyond being an assistant, there aren’t many ways to get an inside scoop about what life in these rooms is … actually like! But here’s a book for that!

Remember what I said before about write write writing a lot? This is twice as true for comedy nerds who are in for the long haul. Get your giftee some kickass pens so that they can do that!

There’s never been a better book about writing than this. Don’t you want to be associated with the best and most transformative book in your giftee’s life?! Sounds intense but in a really good way.

Have you ever heard of “morning pages?” I bet your comedy nerd has. It’s this thing where you wake up and write before the day has a chance to beat you down. Sounds nice in theory, but not all of us comedians are morning people! Most of us stay up late to “go out” or “stay in and watch The Good Wife again.” So having an inspirational mug like this says: Don’t be a jerk, just write.

Okay, I know you hate me for putting this on the list. And that is FAIR. I’m okay with shouldering this burden. And here’s why: I really love my iPad. I finally made the investment last spring. I got an iPad and Apple Pencil, and y’all….it rocks. I color now. And I play solitaire. It’s so nice. But the thing it is BEST for…reading and marking up scripts. My own, my students’, my friends’. It is so much easier to get into a paper script with a pen in hand. I had been missing that tactile interaction with my CRAFT (yuck, I suck) for years, but now I have it back! Without wasting all the paper and ink! So if you’re looking to spend dollars and dollars, and your giftee is committed to comedy, this is a great gift.

The deeper into a project I get, the more likely it is that I have three screens and several books open. Sometimes, I’ll have a script up on my computer, revision notes up on my iPad, Bob’s Burgers on the TV, and a few reference books or maps. (That either made me sound very cool or truly lame. Jury’s out.) But, a lot of comedians I know are in the same boat! We’re a bunch of lightly-medicated multi-taskers out here doing our best. Help the royal “us” by giving your bestie this cool stand.

Finding a game that is fun, actually funny, and gives your comedy friends a chance to shine is tricky. Someone Has Died hits the spot delightfully. The point is to convince everyone that your character deserves a massive inheritance. But, with just the right amount of rewards and tricks to keep your friend on their toes. It’s very fun! Lots of laughs to be had!

The comedy hustle is 10% telling your jokes and 90% convincing people to come to your shows. Take a little weight off your comedy-committed bestie’s back by providing them with the gift that keeps giving: a year-long subscription to Canva Pro. Canva’s got all the templates and stock images that they’ll ever need. They don’t pay me for this, but as a non-designer who makes some of their money based on their design-abilities…I’m grateful for Canva every day.

I’m tired of seeing MEN on the STREET! When I could see funny ladies and enbys on the street! Give the gift of a tiny mic so that your giftee can add crisp sound to their tiny hands TikToks.

Earlier this year, our community manager (and kick-ass standup) Kristina was lamenting not having a good phone tripod. All the comics at mics had them! So, straight from the source, the best thing you can get your comedy friend is an iPhone tripod so that they can set their phones up to record. It’s hard to make your friends record your sets–mine hate that. But, your phone isn’t your friend, it’s your employee. So, tell your giftee to put that employee in this simple machine and press record.

Gloom is one of my first favorite games. It’s mostly an excuse to tell very silly Adam’s Family-esque stories. Your goal is to take a sad gothic family, make thier lives as sad as possible, and then kill them off. Your friends will be racing to do the same with their families. If it sounds dumb, it is! But you get to explain why the family dog is “Cursed by Crows!” and what’s better than that! It’s a great gift for your comedy nerdiest pal because they’ll shine in the story-telling, and all your other friends will get the opportunity to show off (with fool-proof prompts) too!

Look cute? Feel cute? Tell good jokes! I don’t make the rules. But you and I both know that whoever DID make the rules doesn’t want us to look our best or do our best. Screw them! Arm your giftee with cute nails so that they can go be a badass on stage.

Listen…The simple reality of the scene is this: comedians sometimes need to be prescribed medication that help us exist. Is your giftee on birth control? Anti-depressants? Anti-anxiety pills? ADHD medication? EXACTLY. We all are! Get them this cute case that says “I’m not taking Imodium and eating pizza! I’m taking Zanax and eating pizza!” I use an old Clariton bottle for my loose pills and it just doesn’t have the same wow factor.

If your giftee is really committed to comedy, there’s no better place for them than GOLD. With like-minded peers, here they’ll find the safest and funniest shows, classes, open mics, and more! I’m not bragging, I’m just telling you how it is. We’re here for your comedy-committed bestie, let’s make their frickin’ dreams come frickin’ true!