How to write a comedy sketch - GOLD Comedy
Ever wonder how the writers behind shows like SNL or A Black Lady Sketch Show do it? How do they crank out so many funny sketches? Well, turns out there’s a pretty exact science to writing sketches. If you plug your goofy ideas into this structure, you’ll probably have a sketch at the end! Isn’t science cool?
The secret to sketch success, the special sauce, is called 5-Point Structure. And it’s about to change your whole life!

What is 5-Point Structure?

ALL. sketches (Yes, ALLLLLL sketches) can fit into the same, simple 5-point structure. This is the ultimate key to writing sketch comedy. But, it also serves as an important key to rewriting and even watching sketches. 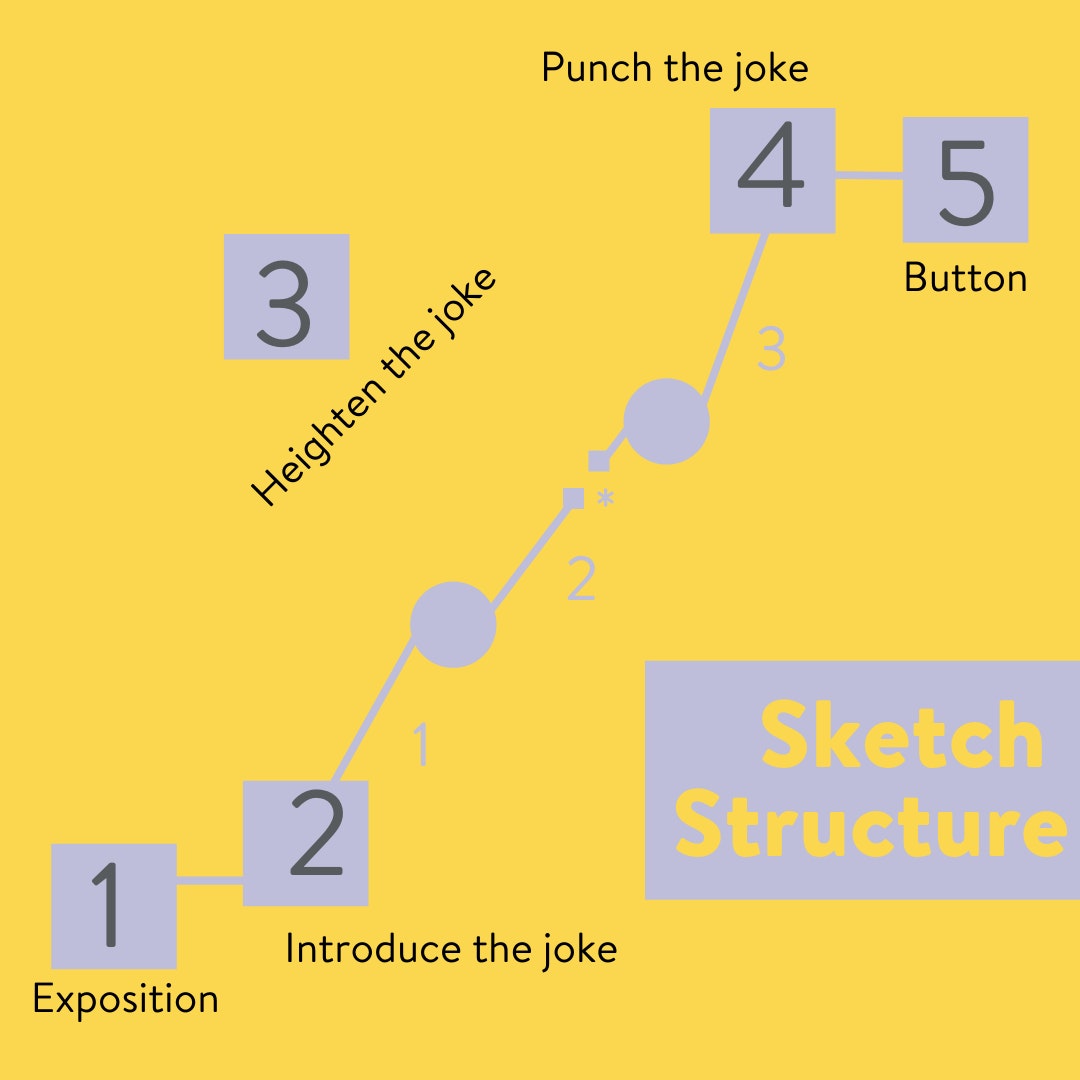 Ex.: MACY (a little girl) skips up to PAULA (an old woman)

MACY: Grandma! Why can’t we get ice cream?

PAULA: Because, sweetheart, there’s no ice cream on Mars! Plus, we’re too busy chopping all this wood.

Once you’ve set up the reality of your world, it’s time to add the joke. Keep in mind you want to focus on ONLY ONE crazy/wacky/funny thing. If you toss out all the rules (before perfecting them), your sketch will be too confusing to be funny!

Sometimes called the “GAME,” the joke is usually the thing that first sparks your interest when thinking of a new sketch. In this beat, you just need to get the joke started

Ex.: JENN is throwing a party, but she only has Joni Mitchell CDs.

What does “heightening” mean? Great Q! It’s sort of like turning the volume up on the funny. Whatever your joke is–make it MORE!! (More ridiculous, more specific, more and more-er and more-est.)

In the example above, maybe Jenn’s Joni Mitchell CD’s get sadder, louder, or less scrutable as the sketch goes on.

This is important because it defines the tone of your sketch. Three people could write a sketch with the same joke, but if they heightened it differently, they would feel like completely different sketches.

This typically happens over 3 beats, each crazier (and funnier) than the one before.

Bonus!! The “break” doesn’t happen in every sketch. But it’s the little cheeky moment in some sketches where the rules are broken for the sake of a laugh.

EX. MAURIE says she does love Capture the Flag because it represents struggling against oppressors.

So, you’ve made a lot of funny out of one small joke. Perfect! Now you have to get out of the joke. How to end a sketch? Great Q. Here are just some ideas:

The goofiest and most fun part of a sketch is the button. Don’t sleep on the button! You want to leave the audience laughing.

This is one last joke that slaps a laugh on the end of a sketch. This joke can be a little random or even discredit the joke of the sketch.

MANDY: Yeah, fine. But then why did you judge me for eating slugs!

You now know how to write a sketch. Want to see this in action? I teach sketch comedy at GOLD, so swing by the club and sign up for my class. Sketch comedy only gets crazier from here.